Major Moses Purnell Handy, Chief of the Department of Publicity and Promotion for the World’s Columbian Exposition – the great Chicago World’s Fair of 1893 – mounted a PR effort that was every bit as elegant and sophisticated as the Fair itself.  In so doing, he not only helped to attract 27 million visitors, making the Exposition the most popular and profitable undertaking of its kind, but also began to reshape the commonly held opinion of Chicago as uncouth, unsophisticated, and unfit to host the world. 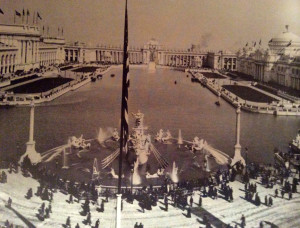 Handy had grown up in Virginia, served in the Confederate army as a teenager, and gone on to a distinguished career in journalism with newspapers such as the Richmond Dispatch, Richmond Enquirer, New York World, New York Tribune, Philadelphia Times, Philadelphia Press, and Philadelphia Daily News.  His wife, Sarah, was also an occasional journalist, and ultimately so were several of his children.  He was an exceptionally good networker: founder of the Clover Club in Philadelphia, member of numerous other social clubs, world traveler, theater-goer, consort of senators and presidents, part of a large family whose roots in the United States dated back to 1635.  He had even been involved with three prior major celebrations: the Vienna Exposition in 1873, the Centennial Exhibition in Philadelphia in 1876, and the Constitutional  Centennial Commission in 1887.  But nothing could have prepared him for the task at hand when, in the winter of 1890, he was appointed to lead the publicity efforts for the World’s Columbian Exposition.

Yet Handy quickly articulated a brilliant strategy to allay concerns about Chicago, and a multifaceted tactical plan to attract exhibitors and visitors.  The mere effort involved in gathering information about the incredible diversity of exhibits – locomotives, Bach’s clavichord, a California redwood, Lincoln’s inaugural address manuscript, a map of the United States made out of pickles, 27 dynamos, a 70-ton telescope, the Cairo Street Village, a fountain of red wine, the Liberty Bell, paintings by Renoir and Picasso, 5,978 lectures, a moving sidewalk, an Etruscan chariot, an 82-foot high Tower of Light, etc. – and disseminating it all through words and pictures was a marvel of marketing logistics.

Though he fought against budgetary constraints and small-minded office politics, Handy’s efforts were still wildly successful, especially in building awareness.  As one government official wrote to an American newspaper in 1892, “I have just returned from a trip to Southern Europe, Asia Minor and Egypt.  I was astonished everywhere, even in Palestine, at the keen interest manifested in the coming Exposition…. Palestine is in a deep slumber of centuries, and Jerusalem is dead.  But their inhabitants had heard about the fair in Chicago, and our Bedouin dragoman, learning that we were Americans, triumphantly assured us that he was coming over next year to the fair.  Never was anything so well advertised.”

Thus, Moses Handy and the Department of Publicity and Promotion paved the way for an event that was almost universally hailed for its inspired vision, and for the emergence of Chicago as one of the great cities of the world.