excerpts from Chapter 1: Burying a Legend

Neatly tucked in a valley between North Table Mountain and South Table Mountain, about twelve miles west of Denver, Golden sits where the high plains abruptly end their eight hundred-mile run at the foot of the soaring Rockies. Home to only twenty thousand people, it is nevertheless known by millions because of its recurring cameo in the ad campaigns of its largest employer, the Adolph Coors Brewing Company. And although Golden was founded during the Pike’s Peak gold rush of 1859 and is still home to the Colorado School of Mines, it actually derives its euphonious name not from a metal but from a man—Thomas L. Golden, a Georgian who came west in search of treasure and then left. (What’s more, the most important metal in town is not gold, but aluminum, courtesy of the Rocky Mountain Metal Container facility, the largest aluminum can production center in the world.)

And then there is Golden’s best-known resident: William Frederick Cody (Buffalo Bill), probably the most famous American of his era, who helped settle the rugged frontier, entertained more than 50 million people with his Wild West show, and was the subject of more than 550 dime novels . . . but who is buried there in relative obscurity high atop Lookout Mountain.

To reach the Buffalo Bill Museum and Grave from the center of Golden, you turn onto 19th Street just south of where Clear Creek crosses under Highway 6 on its long amble to the South Platte River. From there it is a short though rugged drive up Lookout Mountain Road, through some forty-two turns, many of them hairpins, up, up, up, climbing 1,700 feet in less than five miles, squeezing past the inevitable thrill-seeking cyclists. (For a major attraction, the museum is in a relatively inaccessible location: annual attendance averages seventy thousand, but on days of inclement weather, it sometimes attracts only twenty visitors, maybe fewer.) Each turn reveals a new and more magnificent vista: the snowcapped peaks to the west, the skyline of Denver floating ethereally in the distant clouds to the east, and the evergreens standing tall and proud against the backdrop of tawny rocks and hayfields below.

Regardless, here he has lain ever since the day in June 1917 when some twenty thousand people wended their way up the mountain to pay final respects, just one manifestation of an outpouring of grief and respect that had not been experienced in America since the death of Abraham Lincoln.

Today, the colorful and well-thought-out displays at the small museum offer some wonderful insights into Cody’s amazing life. A few steps away is a rustic-looking wood-and-stone structure, the original museum building from 1921, called the Pahaska Tepee, which now houses a café and a gift shop densely packed with Buffalo Bill–themed key chains, magnets, t-shirts, mugs, postcards, books, posters, license plate frames, Stetsons, souvenir rugs, and one of those machines that stamps an image on a penny. Sitting atop spinning racks of postcards are signs created on a printer that was low in ink: “Buffalo Bill Says Half Off On Fudge.” On the outside of the building is a wooden sign plugging Duffy’s Rowdy Root Beer.

From the Pahaska Tepee you can walk along a pathway, to which patches of snow and ice cling persistently into springtime, past the inevitable silver triangular coin-operated binoculars, up to the grave.

It is a solemn and modest place—a small stone column with an inset plaque, surrounded by a wrought-iron picket fence—but the views are impressive. From here, on a good day, you can see beyond eastern Colorado all the way to Kansas, Nebraska, and Wyoming. If you look hard enough, perhaps you can also see back in time, with the jagged mountains, open plains, smokestack plumes, and seemingly Lilliputian metropolis all suggesting important passages in western history that brought us to this point, this place, this very moment. 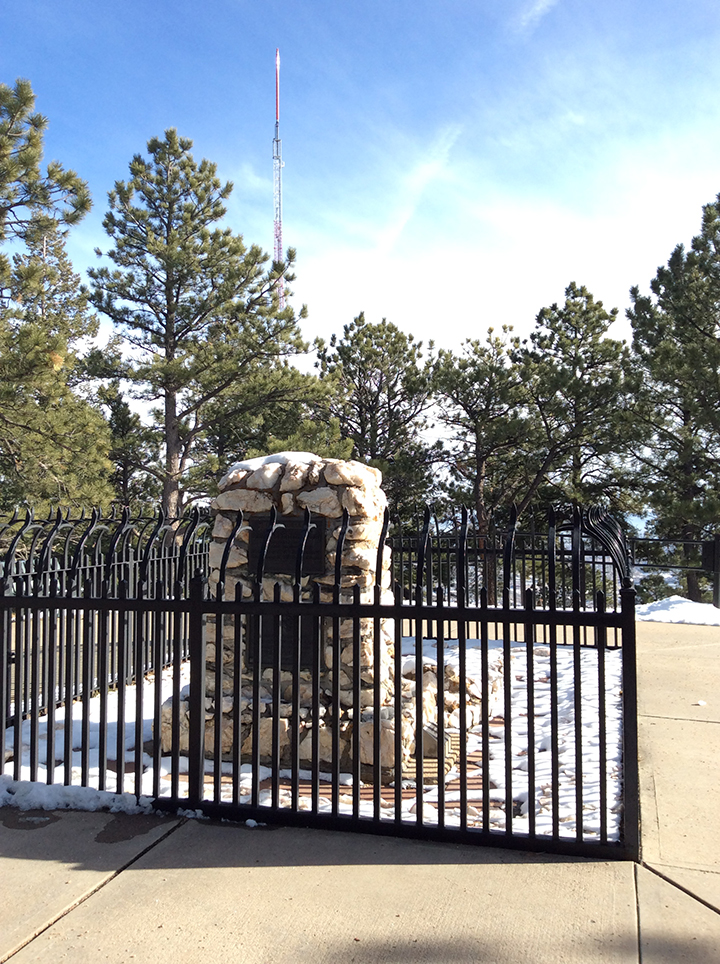 But the reverie does not last long, for looming above it all is the enormous red-and-white Lake Cedar Group television antenna, part of a cluster of towers, antennae, and microwave-relay dishes that punctuate the view like asterisks as you stand by Cody’s grave. The antenna, erected in 2009 to replace the even larger KCNC-TV tower and predecessor radio and TV towers on Lookout Mountain dating all the way back to 1952, is today shared by Denver television stations 4, 7, 9, and 20, beaming high-definition news and episodes of The Big Bang Theory and Grey’s Anatomy to the good people of greater Denver. At 730 feet, it is large, but all the more so because it is built on the side of a steep mountain that itself sits on top of a mile-high plain. “Nothing special in the United States,” said Don Perez, a veteran television engineer who worked on the project, of the tower’s size. “We just happened to have a big rock to park our antenna on.”

Thus, controversy aside, it is hard to imagine a more fitting resting place than this big rock for a man whose dashing career of scouting, fighting Indians, and hunting buffalo helped win the West, and whose re-creation of all those events on stage and in arenas helped fixate the western myth and transform the world of marketing and communications. In his life Cody was a bridge between Old World and New, and so he is in his death. The vastness, the fresh air, the endless prairie, the vistas, the heretical challenge to Mother Nature’s dominion, the encroach of industry, the tourist tchotchkes, the towering communications beacons—all are as they should be.

And yet there is something wrong, something important, something out of balance in this world. There is a spirit missing. Because Cody’s story, Cody’s legend, would never have come to pass without the trailblazing promotional efforts of John M. Burke—for forty-five years Cody’s press agent, publicist, advance man, general manager, mythmaker, impresario, apologist, storyteller, and friend.

As early as 1869, Major Burke, as he was widely known, recognized Cody’s heroic nature and the powerful symbolism of the fading West, and he gradually fused them together. Looking back at his first encounter with Cody, Burke wrote (with his typical hyperbole and tortured syntax) that the scout “seemed surcharged with youth, life, blood, graceful, dignified poise, while the fact of his daily duty being to defy savage death surrounded him with a tragic atmosphere investing him with a halo of glory, in the actual, equaling that with which sacred history adorns its martyrs and militant heroes, since the days of Charlemagne and the Crusaders. Oh, for the photo color film then!” 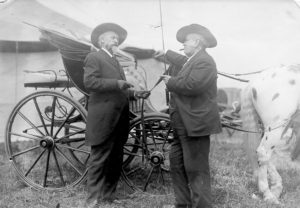 Burke befriended newspaper editors everywhere, regaled them with western stories both apocryphal and apothegmatic, exaggerated or invented tales of Cody’s (and his own) legendary career, mastered the use of photography and lithography with iconic images he plucked from the West, aggrandized Cody’s heroic deeds, kept them in front of the public, and in so doing generated a blizzard of advance publicity for the Wild West everywhere it traveled, year after year. “Even when editors doubted his embellished tales of Cody’s heroism, they printed them,” wrote historian Scott Cutlip. As a result, Burke kept the crowds coming and made what he called the “mimic arena” into one of the most popular attractions of the era, one that toured small towns and large cities for more than three decades and played in front of most of the crowned heads of Europe and military and entertainment heroes of the day.

Thus, Burke may not have invented Buffalo Bill, the Wild West, or the modern concept of celebrity; he just buffed them to a blinding sheen. And he did all of this in an era when the functions of “promotion” and “marketing” were so new, so undeveloped, that they hadn’t even entered the lexicon, let alone the public consciousness. There truly was no marketing industry yet and wouldn’t be for another two or three decades. Yet without broadcast technology, without mass media, without any obvious means for large-scale promotion, Burke somehow built William F. Cody into the nation’s first great marketing pitchman.