Major John M. Burke, an affable, insightful, rotund, sombrero-wearing, soothsaying schmoozer, was the “advance man” for Buffalo Bill’s Wild West for more than 30 years and the primary fabricator of the Buffalo Bill persona that survives to this day.

Early on, Burke recognized Cody’s heroic nature and the powerful symbolism of the fading West, and he gradually fused them together.  Looking back at his first 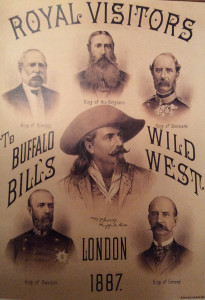 encounter with Cody, Burke wrote (with his typical hyperbole and tortured syntax) that the scout “seemed surcharged with youth, life, blood, graceful, dignified poise, while the fact of his daily duty being to defy savage death surrounded him with a tragic atmosphere investing him with a halo of glory, in the actual, equaling that with which sacred history adorns its martyrs and militant heroes, since the days of Charlemagne and the Crusaders.  Oh, for the photo color film then!”

Burke befriended newspaper editors everywhere, regaled them with stories both apocryphal and apothegmatic, exaggerated or invented tales of Cody’s (and his own) legendary career, and generated a blizzard of advance publicity for the Wild West everywhere it traveled, year after year.  “Even when editors doubted his embellished tales of Cody’s heroism, they printed them,” wrote historian Scott Cutlip.  As a result, Burke kept the turnstiles clicking and made the art form of what he called the “mimic arena” into one of the most popular attractions of the era.

Burke’s profound understanding of the power of imagery, and desire to bolster the Wild West’s claims to authenticity and legitimacy, led him to bring Annie Oakley and Sitting Bull into the show; to create vivid promotional posters that featured everything from vignettes of Cody’s scouting career, to photos of army heroes with whom Cody had served, to Napoleon; and to stage ironic and incongruous photographs of the show Indians posing in a Venetian gondola, at the Vatican, and at the statue of Columbus in Barcelona.  It was Burke who filled up a tugboat in England with reporters and a band playing the Star Spangled Banner to welcome Cody and the Wild West to their first European tour; Burke who persuaded Cody to wear a long-haired wig when he was no longer capable of growing his own iconic mane; Burke who opened up the Wild West’s campground to visitors, creating a major photographic attraction in its own right and an entirely new source of material for reporters; and Burke who brought Buffalo Bill and some of the Indians to Menlo Park to be captured in moving pictures by Edison.  He was a visionary promoter, way ahead of his times, and he had a great subject to promote.