R.F. “Tody” Hamilton, the “press agent plenipotentiary” for the Barnum & Bailey Circus for 25 years, ratcheted up the sense of anticipation of the circus’ arrival through his truly breathtaking use of adjectives and alliteration.  “Octosyllabic artist,” the New York Times called him.  Typical of his Hamilton’s hype:  “ANOTHER AWFUL, APPALLING AERIAL AUTOMOBILE SOMERSAULTING ACT BY A YOUNG AND FAMELESS FRENCH LADY.”  The newspaper editors guffawed at first, but then ate it up and conveyed his enthusiasm through their papers to the public.

At the age of 14, Hamilton had followed his father and grandfather into the newspaper business, and he later started three esoteric trade 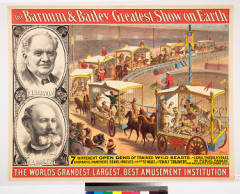 magazines on his own, including Hairdresser and the Railroad Age and Steamship Gazette.  But an early interest in the circus never quite went away, and time and again he found himself back in the business of novelty entertainment – serving as business manager of an aquarium, promoting a six-day roller skating contest, and then, around 1881, teaming up with the greatest promoter of the 19th Century, P.T. Barnum, who was just then shifting his attention from museums, exhibitions and “humbugs” (promotional fakes) to the circus.

Hamilton quickly acquired a reputation for his imaginative use of words.  “To state a fact in ordinary language,” he once said, “is to permit a doubt concerning the statement.”  He lent excitement and legitimacy to Barnum’s new effort, and managed to land one circus feature story after another in the city pages instead of the clipped notices that traditionally appeared in the paper’s  “dramatic department.”  Barnum, never one to share much of the spotlight, said he owed more of his success to Tody than to any other man.

Before he was through, Hamilton became almost as famous as the circus he was promoting.  “His name,” wrote the New York Sun in 1906, “is known from one end of this country to the other – and then some…. It may be asserted without fear of contradiction that the outpourings of Mr. Hamilton’s muse have been more widely perused than any other literary efforts of the age.”